An Adafruit Trinket-based button that outputs a Teenage Engineering Pocket Operator sync track. I made this Trinket version after I made a straight-up ATtiny85 / GCC version because the Trinket board is probably easier for most folks to get started with.

I personally like using Platformio for my AVR (Arduino) builds - but I think you could - with a little file re-arrangement - build this inside the Arduino IDE. Let me know... 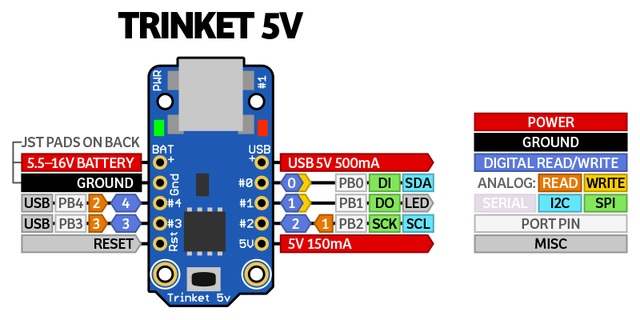 My audio cable has 3 conductors:

My arcade button has 2 conductors:

The OLED display has 4 connections:

Here is the Software . I like Platformio to manage my AVR (and other) projects. I prefer a command line build, but to each their own. Platformio is trying to address the mess that is multiple build platforms and library management. It's not perfect, but works for me. If you want to stick with the Arduino IDE, I think you can just grab all of the files in the lib/ssd1306xled folder and move them into the src folder and build it fine.

If you do use Platformio, here are the build commands...